ANOTHER REASON WHY WE’RE THE BEST

As everyone knows our madman Captain, Claude Girouxxx, got freshman year of college hammered on Canadian 4th of July (July 1st) and repeatedly grabbed a male cop’s ass.  Now for pretty much all fanbases, this would be disastrous.  The torment from the opposition would be unrelenting.  However, for the best phans in the world, we handled it rather well.  My reaction went something like this (total time approximately 45 seconds):

What happened next, was a deluge of jokes made by Philly phans on Twitter that pretty much covered the gamut of this ass-grabbing escapade.  There was nothing left for the other (lesser) fanbases to make fun of.  By mid-afternoon, not many people were even talking about it anymore as they were on to the next thing, which was how hot it was and posting a picture of a thermometer to prove it.  So once again, Philly phans, you’ve proved to the world that we’re the best there is.  Let’s Go Flyers and Let’s Go Misguided Attempts at Humor!

THE CURIOUS CASE OF DOMONIC BROWN

It was well-known when the detestable Dallas Cowboys beat our majestic Philadelphia Eagles on October 20th, that local hero and Phillie, Domonic Brown, tweeted a tweet that sent our hearts into a fury.  I was one of the first responders.  Via CBS Philly:

In a drunken rage, I immediately unfollowed Dom due to his typical Cowboy fan (AKA not from Dallas) antics.  I didn’t really miss him much until yesterday when he tweeted this from his Instagram…

This was the best thing I saw all day.  Then I saw this…

Sweet Lord!  Not only is Dom Brown living my boyhood (and adult) dream of playing for the Phillies, but he’s also BFF’s with the Phanatic?!?  I’m beyond jealous.  If Dom is this close of friends with the Phanatic, there’s no way he can be that bad of a guy (despite not loving the Eagles), right??.  Perhaps I should finally forgive him.  Spring Training is only a month away and I can’t go into the 2014 Phillies season hating one of the key members of the team.  My icy heart is melting…

The WordPress.com stats helper monkeys prepared a 2013 annual report for this blog.

A New York City subway train holds 1,200 people. This blog was viewed about 4,500 times in 2013. If it were a NYC subway train, it would take about 4 trips to carry that many people.

A RESURRECTION OF SORTS

I haven’t updated this site in a while.  It had been so long that I couldn’t remember my password.  After resetting it, I was amazed to see that people were actually still visiting each day.  Why haven’t I been posting?  Well, it’s been a combination of re-acclimating to life in the USA as well as battling post Arena Bowl depression (PABD) for the last two months.   Things have been mildly looking up lately though.

The Phillies were a massive disappointment again and the Flyers can’t do much right.  The 76ers are about to embark on their quest for the #1 draft pick.  The Eagles, however, are in a terrible division and are in PHIRST PLACE!!  Therefore, they have been hastily anointed as the new Saviors of Our City in the midst of our darkest hour.  With a new-found sense of purpose, I look forward to keeping up with this site and providing you with the most displaced and dopey content I possibly can.  Thank you and Fly Eagles Fly!

THE PHILADELPHIA SOUL MUST FULFILL THEIR DESTINY AND SAVE US ALL

I haven’t posted anything in a while.  Post-deportation has been tough and time-consuming.  The Phillies stink and today Charlie Manuel got fired.  Needless to say, I’m not a happy phan right now.  So what is the only thing that could possibly cheer me up right now??  A PHILADELPHIA SOUL WORLD PHUCKING CHAMPIONSHIP!!

I’ll be honest.  I haven’t watched a single Soul game all season.  I tried to watch the conference championship last weekend, but the hotel I was staying in had lousy internet and it wouldn’t play.  I’m not even going to act like I can name a single player other than Tiger Jones.  However, I do know that it’s always a perfect time to hop on a bandwagon.  So, let’s root the hell outta the Soul tomorrow and go to the parade next week.  We all deserve it.

If you missed it, here’s the original.

Even through my recent deportation and subsequent rebuilding of the Phan empire, I haven’t ceased the search for the Phillie Phanatic’s missing phather.  I’ve found a few clues here and there since my last post about the search.

I found this picture of former Phillie and loudmouth Fox commentator, Tim McCarver, introducing the Phanatic to everyone on Captain Noah’s show.  Could McCarver be the deadbeat dad?  The resemblance between the two is striking…

I was all set to haphazardly name McCarver as the Phanatic’s phather and then I was sent this via Twitter:

I have to admit that I wasn’t thinking about a non-human/non-Phanatic phather.  There are definite similarities between the Phanatic and Mr. Snuffleupagus.  I hadn’t really believed it, however, until I read this major bombshell today from The Good Phight.  Please, go ahead and read it.  I’ll wait here.

The Phillies are no longer losers.  They aren’t exactly winners either.  With a .500 record and a lot of baseball left to play, they are still contenders.  You can read article after article about how the Phillies should actually have a much worse record than they do and we’re foolish to believe that the team can win enough games to make the postseason.  However, that’s what sets Philadelphia sports phans apart from being phans from any other city.  We believe all the time.

Maybe it’s sheer stupidity, insanity, or stubbornness, but I still believe that the Phillies can win the NL East.  I’ve seen teams in every sport get hot at the right time and win.  It happens all of the time.  Maybe the Phillies really aren’t good enough to make a run at it.  But, what’s the point in watching if you don’t believe?  It’s why we all have gray hair, drink, smoke, etc while watching the game.  We believe, we care.  If we didn’t then we’d be as good as Florida sports fans or Natinals (sic) fans.  So if you don’t believe, that’s fine.  Just STPhU and don’t ruin it for the rest of us.

The Phan Phamily is back in the United States of America.  My Mini-Chooch induced deportation happened last week.  Fortunately, the American officials that reclaimed us didn’t give us any trouble as we came through Ellis Island.

Since, we’ve been back to the Land That I Love, I haven’t had much time to do anything Philly Sports related.  I’ve seen a few innings of the Phillies and that’s it.  I even missed Sharknado last night.  However, once I sort my life back out and complete the necessary paperwork (SMPhH x’s infinity), then I’ll be back to resume the search for the Phanatic’s phather and provide the usual dopey content that you’ve come to love and expect.  Love yous!

MINI-CHOOCH GOT DEPORTED TO PANAMA

Early this morning, the Chilean government came and took Mini-Chooch away.  I don’t even know what to say.  I’m heartbroken.  He’s being sent to Panama immediately.  Mrs. Phan inexplicably took a picture of the ordeal… 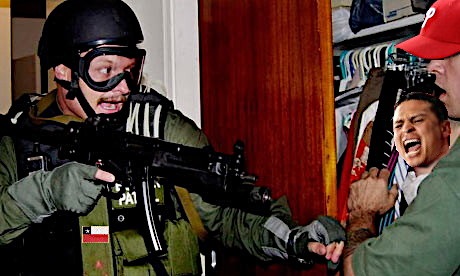 I’m hoping he’ll be happier in the long run in Panama.  They actually care about baseball up there and he’ll fit in a lot better than he did here.  I don’t think I’ll ever be able to eat iguanas fritas again.  Hopefully we’ll be able to visit him sometime soon.  I don’t know if we’ll be allowed to though.  SMPhH this is the worst.