I haven’t abandoned hope on trying to find out the identity of the Phillie Phanatic’s phather.  After examining the possibilities of Bill Giles, David Montgomery, Gary “Sarge” Matthews, Tim McCarver, and Mr. Snufflelupagus, the trail seemed to have died a year ago.  However, it was renewed again yesterday as I read Tom Burgoyne and Len Epstein’s book, The Phillie Phanatic’s Galapagos Islands Adventure, to Baby Phan One.  Look at this picture from when The Phanatic visits his motherland of Phanatic Town in the Galapagos Islands. 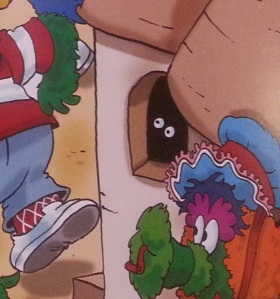 The entire populace of Phanatic Town is out celebrating the arrival of their hero, The Phillie Phanatic, except for that solitary pair of eyes.  Surely this is The Phanatic’s missing (more likely deadbeat) phather.  He’s clearly too ashamed to show his face to his son and atone for his phailures.  He couldn’t even come out to wave goodbye.  SMPhH…