The ongoing search for the identity of the Phillie Phanatic’s phather has taken an interesting turn.  After I recently suggested that David Montgomery or Bill Giles was the deadbeat dad of the Phanatic, I got this comment from my phriend, Girls Best Phriend.

I have to admit that I’ve never thought of that.  It would explain some things.  During last night’s edition of #AskTheBooth, I posed this question…

Again no answer from the booth, the team, or The Phanatic himself.  Then this happened…

Now when there’s smoke, there’s fire.  More than one person accusing Sarge of being a possibly deadbeat dad is a bit too much coincidence for me.  Some evidence to refute this claim would be that Gary Matthews only played for the Phillies for 3 seasons.  Also, his first season with the team wasn’t until 1981 which was almost 3 years after the Phanatic was born.  Now he did play his entire career in the National League (excluding 45 games with the Mariners to end his career).  He would’ve made countless visits to the Vet.  However, the Phanatic was born in the Galapagos Islands.

Sarge, a well-known ladies man and crooner, surely made love to countless women all over the world during both the on-and-off season.  Surely, he made a stop to the Galapagos.  This is probably why the Phillies made the deal to bring Sarge to the Phillies and why he continues to work with the team despite playing more games with the Giants, Braves, and Cubs.  With Father’s (Phather’s) Day coming up, we’ll have to take notice to see if the Phanatic has presents for Sarge. 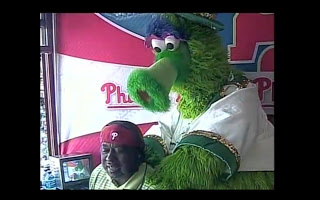